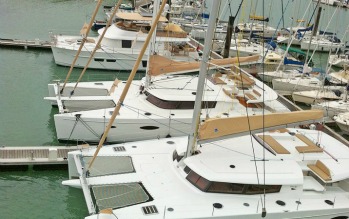 An overview of Fountaine Pajot’s history:

1976: The world’s leading manufacturer of cruising catamarans, Fountaine Pajot was established near La Rochelle, France. The foundational team comprised just four people under the leadership of Jean-François Fountaine, a renowned sailor who competed in the Montreal Olympics, and they produced innovative 505 sailing dinghies that attracted industry attention. The company expanded to produce other models including the 420 and 470, and opened a new manufacturing facility in 1978 in Aigrefeuille.

1985: Fountaine Pajot increases it production area to further develop its range. It launches the fast and innovative Casamance 43. Swivel drifts are abandoned in favour of fixed fins better suited to cruising needs.

1986: Eric Bruneel joined the company, bringing with him the idea of the Corneel 26, a day boat named “Boat of the Year” by marine magazines.

1990: Architect and designer Olivier Flahault is appointed to work on the Fiji 39. Today, almost all our models bear his signature. The following years saw the arrival of the Maldives 32 and Antigua 37. Their buoyancy is provided by the volume of foam placed to the front and rear ends of the shells and their total volume is greater than the required standards.

1991: Jean Berret and Olivier Racoupeau give a new dimension and style to the range.

1992: Fountaine Pajot is the undisputed market leader in international cruising catamarans and continues to innovate. The new Venezia 42 is launched to sensational reviews. Its advanced roof about the windows enables the square to remain clear while being protected from the sun: a perfect design solution and an immediate commercial success. Today, this innovative cap that prevents the greenhouse effect has become one of the hallmarks of the company’s success.

1993: The Tobago 35 is launched with the cap and exceptional usability and navigation innovations.

1994: The Athena 38 is launched, combining beauty of form with intelligent design. Manoeuvring, mooring and storage are significantly improved and it becomes one of the company’s most popular models.

1996: The Bahia 46 is launched and received well for family cruising. The Taiti Day Charter range is also launched, the first mass -produced commercial day charter catamarans that are now seen working across the world.

1998: Fountaine Pajot expands its philosophy with the launch of the first in its range of power catamarans (originally titled ‘Trawlers’) Within two years, the Maryland 37 and Greenland 34 have made their mark on the world of boating.

2000: The Belize 43 is launched, and is the first model to include the now standard Maestro (Owner’s Suite) layout option.

2002: The Infusion process is first used with the launch of the Lavezzi 40, this technique allowing for a composite sandwich to remove solvent fumes while minimising the loss of raw materials.

2005: The Highland 35 Trawler cataraman is released, attracting buyers with its impressive volumes, the flying bridge and large sunbathing mattresses The Mahé 36 sailing catamaran is launched to cater for the entry level buyers while offering all the larger boats’ benefits of performance, safety and comfort. Fountaine Pajot also commenced trading on Alternex (NYSE Euronex) as part of a broader plan to develop the company with significant investment in production sites, technology innovations and manufacturing processes. The subsequent increase in capital assists in expanding the prestigious Flagship range of luxury power and sail catamarans.

2006: The launch of the Mahé 36 is welcomed by multihull enthusiasts as the perfect entry-level and cost-efficient catamaran that is loaded with features normally found in much larger vessels.

2007: On 13 June the company was floated on the Alternex market (Euronex NYSE). This move formed part of a broader plan to expand the group, with substantial investment in two production sites at La Rochelle and Aigrefeuille, a completely industrialised manufacturing process, the introduction of RTM Eco procedures and the update of two sail and power catamaran ranges. The capital raised from this IPO is used to develop the luxury fleet and double the number of flagship class vessels.

2009/10: Six new models are launched in this financial year. The Orana 44 and the Salina 48 benefit from a Maestro version with a new Owner hull; the Lipari 41 is voted a unanimous success after its official launch and sea trials; the Summerland 40 extends the Trawler range delivering outstanding fuel consumption; the majestic Flagship Galathéa 65 is unveiled at the Cannes International Boat & Yacht Show to international acclaim; the Taïti 80 delivers a spectacular day charter catamaran with capacity for 100 guests;  the Queensland 55 is announced, a new Flagship in the Trawler Catamaran Range.

2010/11: Fountaine Pajot continues the development of its two ranges with the launch of the Galathea 65 Owner’s version and the new Mahe 36 Evolution that features a rigid bimini and a host of upgrades. The stunning Queensland 55 is launched in Europe.

2012: Fountaine Pajot continues to innovate with the extension of the Eco Cruising concept that allows clients to cruise further and generate as much energy as they consume onboard.  The Sanya 57 catamaran is an impressive addition to the Flagship Sail range, and Trawler also changes the colour of its hulls.

2014: 2014 is a year rich in innovation with a new model in both the sail and motor ranges. 2014 has seen the launch of a new Summerland 40 LR motor yacht as well as of the eagerly awaited Saba 50 in the sail range.

2015: The company makes significant progress on the international market, with Fountaine Pajot sail and power catamarans ordered by discerning clients from all corners of the globe.

The MY 37, designed by Andrieu, shines more positive industry attention on the shipyard’s Motor Yacht range.

2016: Fountaine Pajot has much to celebrate this year, as part of the shipyard’s 40th anniversary:

2017: The shipyard releases the new model Saona 47 sailing catamaran with sleek new lines for the range, as well as the MY 44 power catamaran.